How To Become An Investigative Journalist 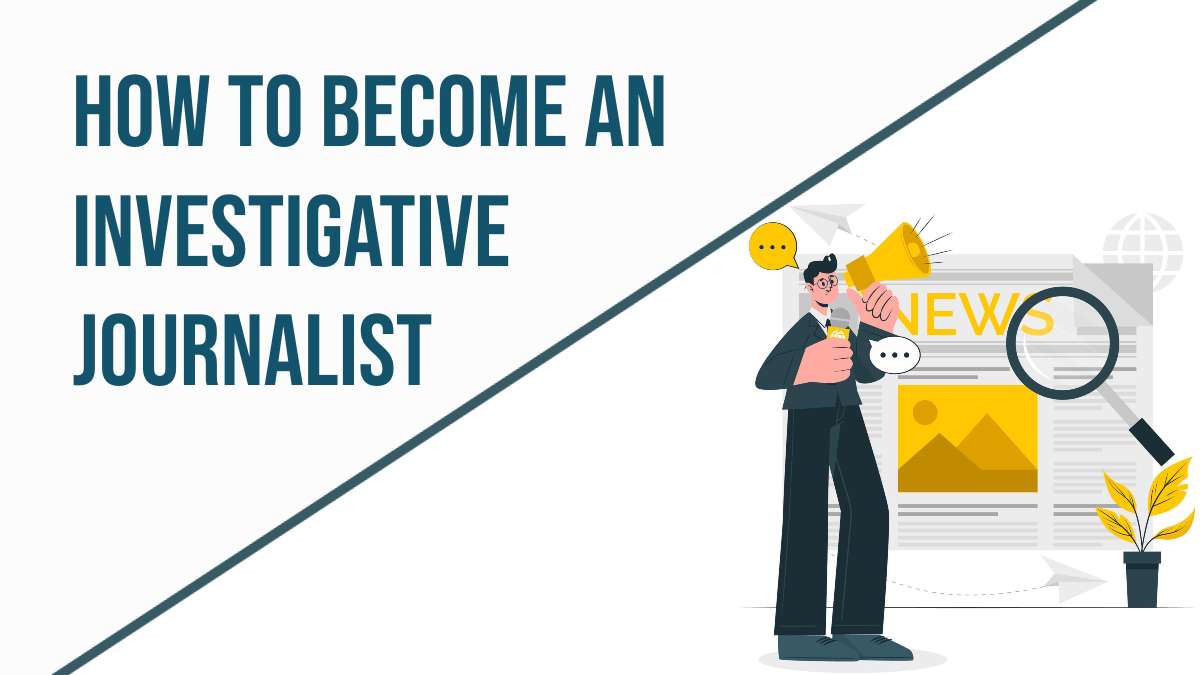 Investigative journalism may be a good fit for you if you’re seeking a hard, competitive, and fulfilling job by unearthing and reporting on critical topics and occurrences.

Also, you can able to know,

What Is An Investigative Journalist

An investigative journalist, sometimes known as an investigative reporter, performs much of the same tasks as a regular journalist. Except that they generate analyses and news stories based on an extensive study into a particular lead or subject.

Most investigative journalists operate as freelancers, although they may also work in an agency or for a television station, radio show, website, magazine, or newspaper under the supervision of an editor.

Investigative journalists are often required to travel and work odd hours in this position. Reporters have been known to put themselves in risky situations to chase a story, such as war zones.

Investigation journalists must have good communication and writing abilities in addition to well-developed investigative tactics.

What Does An Investigative Journalist Do

Still, it usually entails investigating a particular issue that an editor or a news director has given.

Once a topic has been given, investigative journalists will contact sources and specialists on the subject to set up interviews.

Furthermore, they often devote a significant effort to investigating and fact-checking sources.

Then it’s time to compile the data, write the article so that the audience will understand, proofread it for grammar, spelling, and style, and then send it to the editor or news director.

The investigative journalist’s work description has altered in this contemporary technology age. A journalist may report for a print newspaper and a blog or social media accounts such as Facebook, Instagram, Twitter, or even audio reporting through podcasts.

Investigative reporting podcasts such as “The Tip-Off,” “The Bellingcat Podcast,” “White Lies by NPR,” and “Reveal” delve behind the scenes of criminal cases, investigations, and murder scenes.

This is not a good moment to start a career in journalism; there is little capital, many publications are terminating employees, and a large number of individuals still want to be journalists.

Many journalists at the university started investigating this topic, which is probably a beneficial strategy in the long run.

Also, if you were in your early twenties and dreamed of getting into the media, I would presume that this would be the greatest route for you to take.

It will guarantee that you understand the profession’s principles, that you learn from your mistakes, that you meet individuals in the sector, and that you have some time to reflect on your future ambitions.

A freelance investigative journalist has several obstacles, yet it is not nearly as tough as it used to be to do freelance journalism in today’s technologically advanced world.

Investigative reporting may be a good fit for you if you like researching stories that are important to the public and creating easily understandable information.

Read more: How to Become a Graphic Designer Without a Degree

Earning an undergraduate degree in a discipline like journalism or enrolling in a program like online Bachelor of Arts in English, which may help you enhance your writing and communication abilities, is usually required to become an investigative journalist.

Students in English study various texts from throughout the globe and critique them both orally and in writing.

This sort of background will aid you in your preparation for conducting interviews and writing investigative pieces.

News organizations often seek people with past expertise in the news industry. Internships and job shadowing are excellent opportunities to obtain experience while pursuing your degree.

While in school, you may write for the student newspaper or spend a summer shadowing a reporter at a radio station.

Employers like this sort of practical experience since they know you’ll be able to use your journalistic skills right away in your new position.

Another advantage of experience in building a portfolio of your work for potential employers. Bringing a portfolio to an interview demonstrates your professionalism and success.

Employers will check through your work and evaluate whether your writing style and subject selections are a suitable match for them.

Read more: How to Become a Child Social Worker

Newspapers, magazines, and books are the primary outlets for print journalism. Investigative journalists in this sector often do research, organize interviews, and produce stories on a wide range of issues.

Those who spend months or years studying and writing about important news items, such as criminal trials, may end up releasing books.

Broadcast journalism’s purpose is to disseminate news and information to a wide audience immediately.

Investigative journalists do research and create reports disseminated across many media platforms. Global and International Journalism.

Investigative journalists that operate in global and international newsrooms do research, conduct investigations, and publish reports on current events.

They research big criminal cases and investigations throughout the globe to publish information on various news channels.

They may compose material for television or the internet and tell-tales via documentaries or newscasts.

Investigative journalists that operate in global and international newsrooms do research, conduct investigations, and publish reports on current events. They research big criminal cases and investigations throughout the globe to publish information on various news channels.

They may compose material for television or the internet and tell-tales via documentaries or newscasts.

Even though conventional newspaper journalism has decreased in recent years, investigative reporting has not perished.

Instead, most cutting-edge reporting has shifted to online publications and journals, providing a plethora of options for all types of reporting.

Freelance journalists do not work for a certain organization and instead, have the flexibility to report on whatever issues and via whatever media venues they like.

Writers with expertise in multimedia journalism, such as website design or recording, may have a better chance of landing a position.

Though a journalist’s remuneration might vary based on their job, geographic area, years of experience, and specialty, an investigative journalist’s average salary in the US is $35,439 per year.

A journalist collects, writes, pictures, processes, publishes, or reports the news to the public. Journalism is a job title.

Investigative journalism examines a topic in-depth, such as violent crimes, government corruption, or corporate misbehavior.  By evaluating and explaining the important material to individuals, an investigative newspaper reveals hidden themes by those in power and control or by mistake.

A journalist might spend months or years researching and writing a report. “Accountability reporting” is another phrase used by investigative journalists.

News organizations, both domestic and foreign (as in the case of the Panama and Paradise Papers) and non-profit groups like ProPublica, have been more interested in investigative reporting.